When would-be author, Amelie Trott, meets a ten foot tall stranger on the stairs she is faced with an impossible challenge: to rescue her family home from the clutches of the devious Bottomley-Slighs. However, she is soon to discover that this is simply a rehearsal for averting a more sinister danger still – the End of the World…

This is the extraordinary story of how one small girl stopped a planetary catastrophe. It’s a very timely book, written for the child in us all, with a forceful message about the power of young people to transform the world – a theme currently demonstrated by brave young heroes like Greta Thunberg. And with magical synchronicity, the very week Greta began her lone vigil outside the Swedish government last year, over 1,000 miles (1,897 km) away in the fictional world of books, Amelie Trott took to Parliament Square, London – on a mission to avert the End of the World. 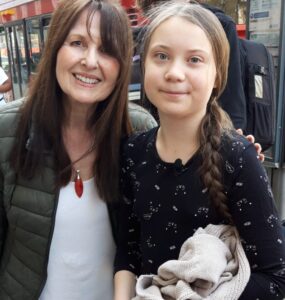 It’s a family drama with an international feel – set mainly in England but with episodes in Washington DC and around the world.

The video above was recorded for World Book Day with Moyra introducing Amelie to the World.

The Video Introduction soundtrack was created and supplied by Keith Forrest – The Spiritual Fruitcake.

And finally, I add my thanks below to those who have been part of my journey to bring Amelie Trott & The Earth Watchers into the lives of so many readers and supporters.

A BIG THANK YOU from Moyra!

My heartfelt thanks go firstly to Ayse Ozden at Dixi Books (the voice fo the new age) for allowing Amelie to fly!

My love and gratitude go also to Alorah Parks for her invaluable guidance and inspiration; to my wonderful son John-Patrick for his honest appraisal; and to Ali cat, my precious little muse.

Thanks to author Keith Forrest and all my treasured friends for their active involvement and encouragement – too many to mention but I hope you will know who you are.

You have all helped to make this book a reality.

A special tribute also to my friend, the late singer songwriter Mel Ellis, for her beautiful lyrics, ‘Peace Begins with Me’ (Chapter 33), and to Barrie Eyden who brought my characters to life in his magnificent cover art.

Next, I must honour my first young reader, Tabitha Wilson. Though we have never met, Tabby kindly agreed to assess the very first draft and wrote me the most beautiful review. She has definitely earned a place in my next novel!

I shall never forget the teachers and children of St.Mary’s Catholic Primary School in Newcastle-under-Lyme who invited me to pilot my book and whose wonderful enthusiasm spurred me on in my search for a publisher.

Finally, to the one at my shoulder, urging me on: I know you are there.

Chapter One: August 2018: The Story That Won’t Go Away

‘So, Amelie,’ the reporter began with a smirk, ‘when did you first meet these, er… little green men?’

A murmur of laughter rippled through the hall and Amelie Trott, aged ten years and eleven months, rose to her feet. ‘Kindly don’t insult my intelligence!’ she replied, eyeing him sternly. ‘Don’t forget, these are my friends…’

A tiny figure amidst the gaggle of newsmen and women, she commanded immediate attention, not least for her bright poppy-red hair caught in little bunches at the side of her head. ‘They deserve our utmost respect. And remember,’ she said, her eyes still fixed on the errant reporter: ‘Earth Watchers are a civilisation far more advanced than our own.’ And as she spoke she appeared to grow taller, more radiant, as though lit from within by a thousand suns. She shone like a beacon at sea.

Five hundred journalists looked on, mystified; some shifted in their seats, others scribbled in notepads. Was this really the voice of a ten-year-old girl?

‘Is it true they’re abducting people?’ one asked.

‘Not entirely…’ Her sombre young face broke into a mischievous smile. ‘However,’ she added, amused by some private thought, ‘there is one case I know of; let’s just say, someone who needed to be taught a lesson.’

A woman in a snazzy red suit leapt up from her seat.

‘May Curley, Sky News… Those lights we saw in the sky, are you really telling us they’re aliens?’

Amelie’s green eyes flashed. ‘Aliens? No, Ms. Curley, I’m not, so kindly don’t use that word! And may I suggest you watch my video on YouTube? Next question, please…’

‘Jeremy Loudly, BBC News. Only ten years old and here you are, addressing this International Press Conference.’ He paused to brush a stray tear from his eye. ‘You’ve already written a book, organised a global campaign, and now have the world at your feet… How on earth did that happen?

And what would you say to other aspiring young children like yourself?’

‘Just this…’ she said gently and the light in the centre of her chest glowed. ‘You can achieve absolutely anything if you remember this one thing:

There is an amazing Invisible Power running through each one of us…’ She glanced around at the surprised faces before her, her voice clear as a bell. ‘Yes, through you too… You are never too small, too young, or too old to make a difference.’

‘So, what’s next then, Amelie? Any more missions planned?

‘Oh yes, there’s still much to be done. The adults of the world can no longer be trusted to safeguard the future of our planet. You see, Jeremy, this is a story that won’t go away…………’